Light-flooded atrium for the book depository

The new central library of the University of Marburg is another architectural highlight for the city in central Hesse. The building picks up on elements of the historical city backdrop and yet sets its own design accent. Particularly impressive: the atrium, whose glass façade consists of around 1,300 square metres of ORNILUX® mikado bird protection glass. 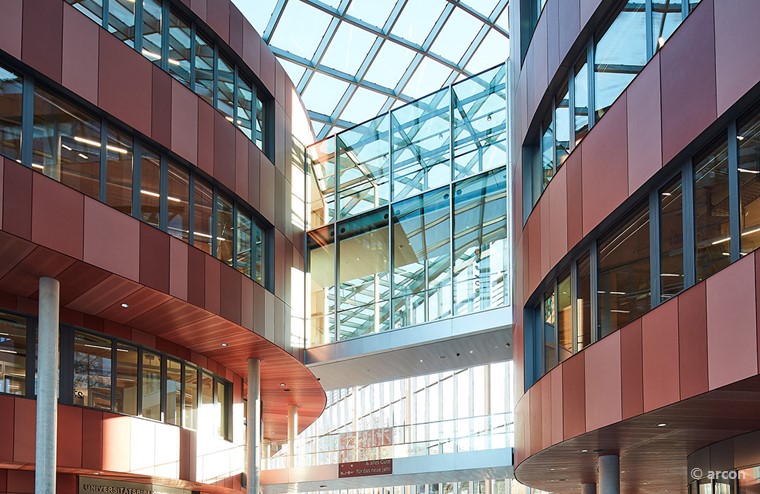 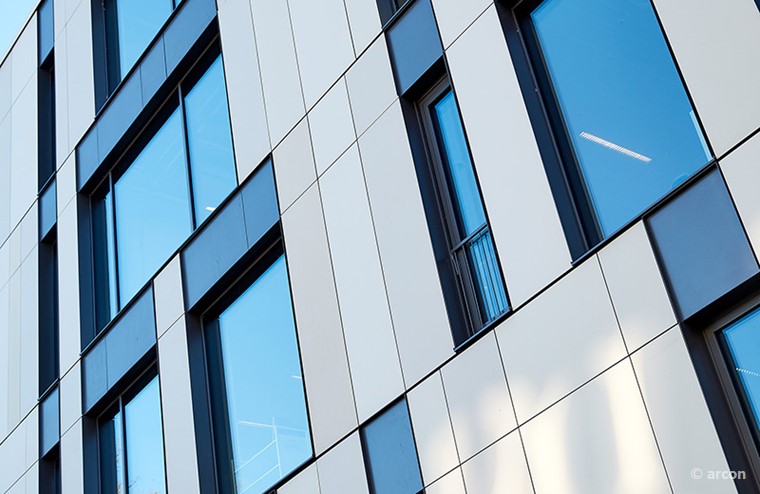 Even in the 21st century there is no way around books, and for a long time now libraries have been far more than mere book storage facilities. They have transformed themselves into attractive and bright places of learning. This is particularly impressively demonstrated by the new construction of the central library building at Philipps-Universität Marburg. Since summer 2018, it has housed more than 3.2 million media on an area of around 18,500 square metres. A total of nine departmental libraries in the humanities and social sciences with a total of 25 branches, as well as the holdings of the previous central library, now have a common roof on the "Campus Firmanei" of the social sciences and humanities. A new building was also necessary because the previous central library, completed in 1967, no longer met the requirements of modern university work. For example, the old building lacked group study rooms and computer workstations.

"The library is not just a place for quiet study. We wanted to create rooms and workstations to facilitate communication and academic interaction," explains Dr Susanne Saker, Public Relations Officer at the university library. The so-called lounge areas also take this into account; equipped with armchairs and sofas, they are intended to serve as places for working in a relaxed atmosphere as well as for communication.

With the building, the architect's office Sinnig from Darmstadt has succeeded in setting an accent in the centre of the tradition-rich city, which nevertheless blends harmoniously into its surroundings. The height of the four-storey new building is oriented towards the historical neighbouring buildings and picks up on their colour scheme: The sandstone colour of the Elisabeth Church and the Schäfer Building is echoed; the light-coloured plaster of the neighbouring Gründerzeit buildings determines the colour scheme of the façades.

The glass façade of the entrance hall is an extraordinary eye-catcher. Together with the glass roof, it forms the central element of the building. It cuts diagonally through the elongated building, forming a passage that provides access to the interior of the library. As a striking passageway, however, it is also a much-used connecting path between the St. Elisabeth city church and the old botanical garden. The atrium thus functions as a link between the university campus and the public space.

Such imposing glazing provides a light-flooded interior, but also harbours a danger: bird strike. Because unlike humans, birds do not perceive conventional glass as an obstacle. To prevent this, ORNILUX® mikado A70 bird protection glass was used in the construction of the university library. The glass has a filigree coating reminiscent of a spider's web. It is almost invisible to humans. Birds, however, see the structure and thus recognise the obstacle. The protective effect has already been confirmed many times in in so-called flight tunnel tests.

arcon® supplied a total of 1,300 square metres for the glazed area of the new library. The roof construction is a special feature. It is designed as a steel grid structure in a curved organic shape with square and rectangular glass fields. Since glass is flexible to a certain extent, the basically flat panes could easily be adapted to the slightly curved shape of the supporting structure. Only at a few very strongly curved compartments did they have to be pulled into the seal with the clamping plates.

The structure rests on steel edge beams that follow the shape of the roof. Almost 20-metre-high steel columns behind the vertical façade support the construction. The experts from the Roschmann Group were responsible for the implementation of the geometrically complex steel-glass structure. Michael Skopp, technical manager at Roschmann, explains: "We prefabricated the entire supporting structure of the prefabricated elements of the roof in our factory in Gersthofen. The welding then took place on site in Marburg." Therefore, the roof structure forms a single unit. "There are breakaway and movement points as well as connection joints to the neighbouring components, but all vertical and horizontal elements of the overall structure consisting of façade and roof hang together," adds Skopp. This construction principle also results in advantages in longitudinal stiffening.

In the meantime, the university library has also become a much-photographed landmark in Marburg's cityscape, as Dr Susanne Saker notes: "A real architectural highlight has been created here." Which, by the way, now has its own entry in the online encyclopaedia Wikipedia. Saker herself also enjoys working in the new premises and, from her observations, feels that the students appreciate the building's bright openness.